The World of Hubble

Since the beginning of the new year, I have been doing a Dog-a-Day project on Instagram (as some of you are already aware). I was inspired in part by Sally Muir’s delightful book A Dog A Day in which she sketched, painted, inked and printed the various dogs she encountered in all their wonderful, amazing, and delightful ways. I have made it two months so far mostly posting photographs of Jack Henry and Hubble. It has been an enlightening, if somewhat scary undertaking. 365 projects can be daunting anyway, but when you begin to narrow the parameters it can become even more so. I found myself having to be more flexible and aware of possibilities rather than trying to stage a shot every single day. I do not have that much patience and neither do the dogs. So it has been more a combination of the everyday, the unexpected, and the more formal.  Some hits and some misses and a lot in between.

My hope is that like Sally Muir, I will begin to take more chances–not just with my guys–but with other dogs. And who knows? Perhaps I may be so bold as to try working with other media and mediums.

The photographs shown here feature some of Hubble’s various wanderings and activities in the course of this project.  If interested in seeing more, check us out at @littledogslaughed

“Dogs love company. They place it first in their short list of needs.”

Images taken with iPhone 7 Plus and processed using Snapseed, iColorama, Stackables and Pic-Tap-Go

For today: The World of Hubble 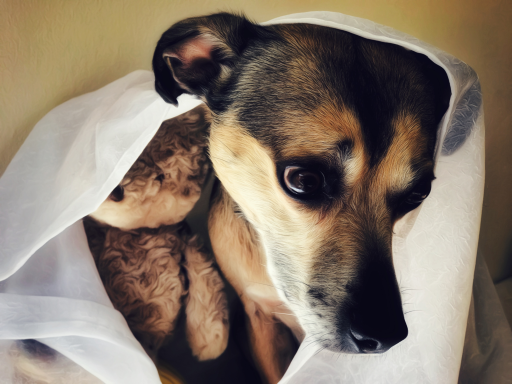 12 thoughts on “The World of Hubble”

A blog about Greece, art, and life in general

Lens and Pens by Sally

An Artist Who Writes